how we can help
Why join HCR? +
About Us Our Values Life outside the office Our Professional Networks
Early Careers +
Routes into a legal career Paralegals career Training Contracts Vacation Schemes
Our Current Vacancies
Around The World +
LEI Network China India Netherlands Nordics USA
Home > Blogs > Avoiding unlawful discrimination 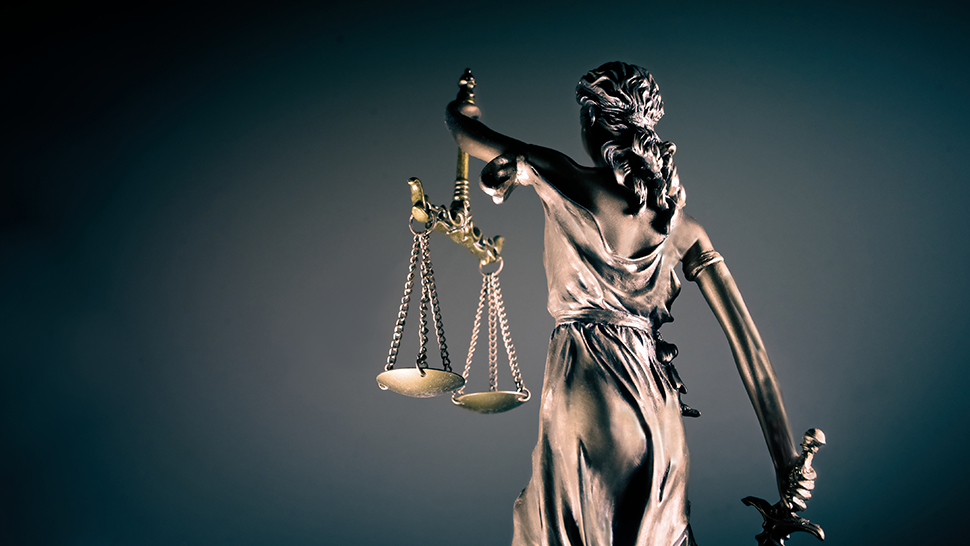 Legal protection against unlawful discrimination under the Equality Act(i) is not only prohibited against employees, but also locum vets, and your customers as “service users” (as defined by the Equality Act).

Across two articles, Stephenie Malone, a specialist healthcare employment solicitor from Harrison Clark Rickerbys, explains some of the important legal considerations and the fundamental elements of discrimination claims veterinary practices may face, as employers and service providers.

What does it cover?

For your practice, the main areas of focus will be protecting your staff and customers against discriminatory treatment. Failing to consider how to avoid unlawful discrimination within the practice risks exposure to claims, which can be costly, and also the impact of the stigma of a successful claim.

In order to establish a discrimination claim, the first requirement is for the claimant(iii) to establish they possess (or are perceived to possess, or associated with someone who possesses) a protected characteristic.

If the alleged treatment is for another reason, it might give rise to a separate ground of complaint, but it will not succeed as a discrimination claim.

There is no service requirement in order for a discrimination claim to be issued: it can apply from day 1 of employment, or for a first time customer. 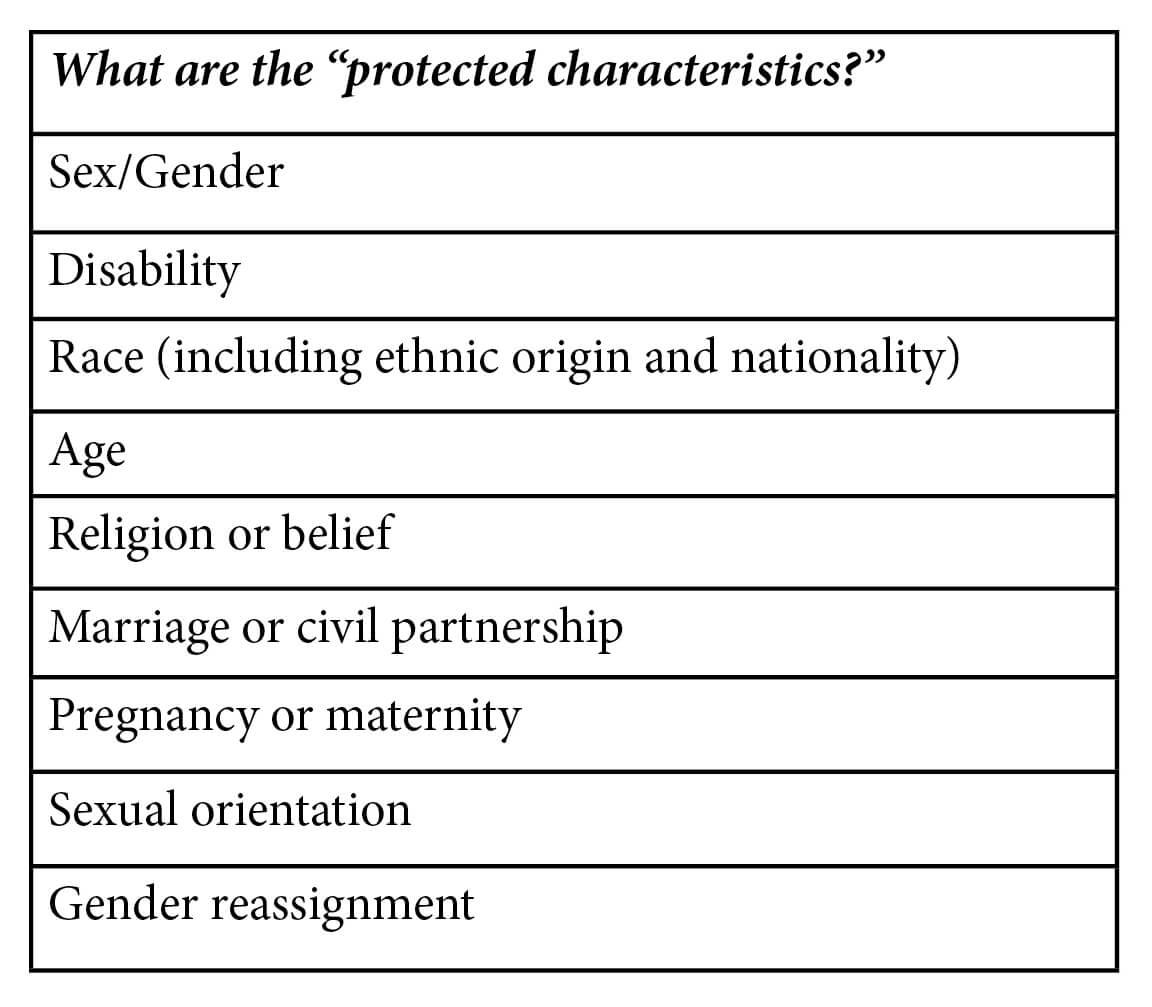 What are the forms of discrimination?

Because of a protected characteristic, A treats B less favourably than A treats or would treat others.

To establish a claim for direct discrimination, the claimant must use a real or hypothetical comparator(iv) to differentiate the treatment they have received, so they can demonstrate it has been less favourable.

“Less favourable treatment” whilst not defined in the legislation, is deemed to cover experiencing a clear disadvantage compared to others.

It is important to note that the difference in treatment is not in itself enough to establish a discrimination claim; the legal examination will need to investigate the reason(s) for the difference.

The discriminatory treatment can be because of the claimant’s association with someone who has the protected characteristic(v). For example, a non-disabled claimant might bring a direct disability discrimination claim where they have been treated less favourably because they have a disabled child e.g. where they need to request time off at short notice for medical appointments.

An incorrect perception that someone has a protected characteristic(vi) leading to against less favourable treatment is also prohibited. For example, mistakenly believing someone of an ethnic origin is of a particular religion and treating them less favourably as a result. 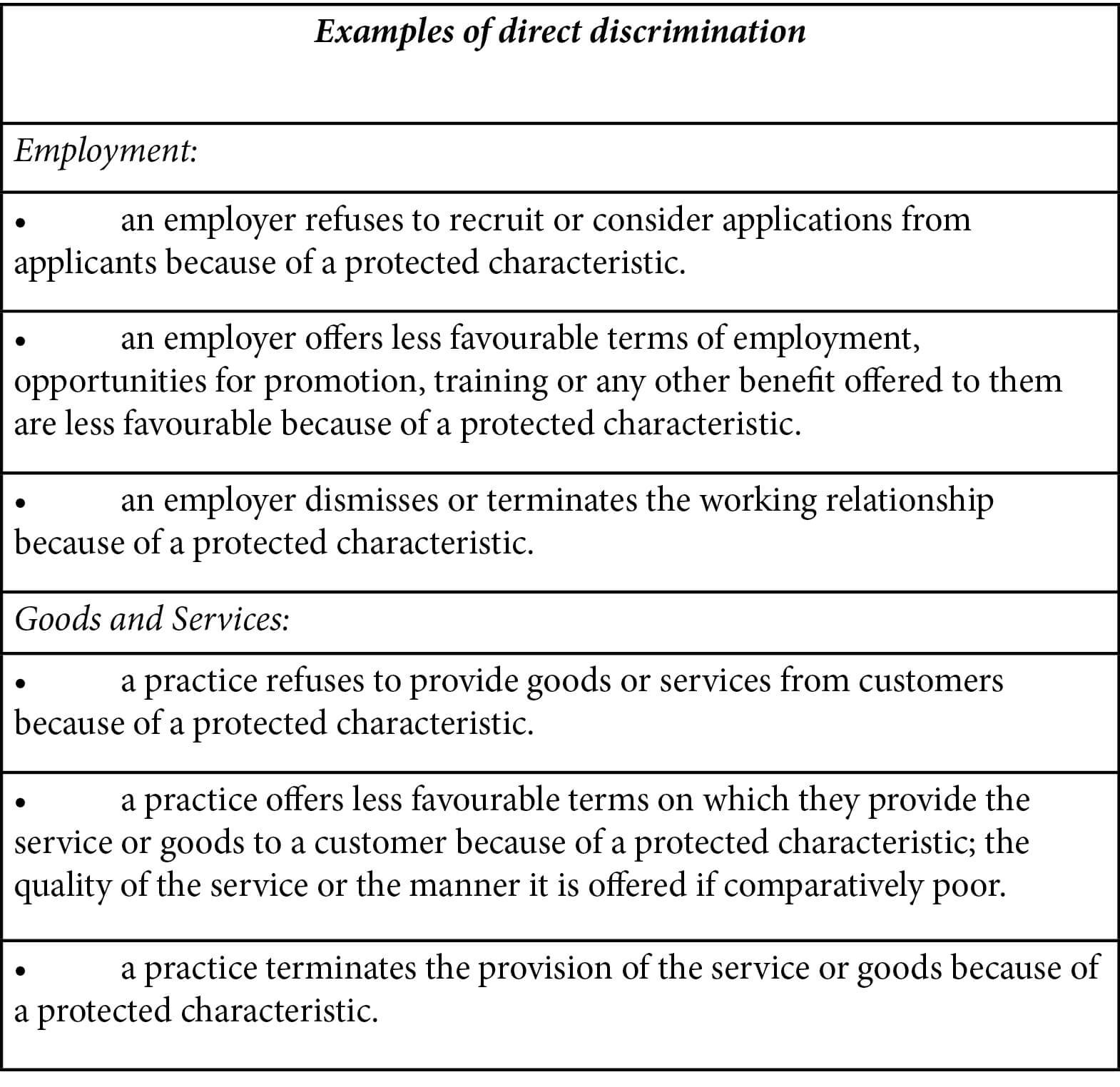 Indirect discrimination occurs where acts, decisions or policies are applied by the practice which are not intended to treat anyone less favourably, in fact have the effect of disadvantaging a group of people with a particular protected characteristic. This is commonly referred to as a “PCP” (provision, criteria or practice).

It is not necessary for the PCP to be a formal policy to be capable of challenge as indirectly discriminatory.

The disadvantage caused by the PCP must be something that a reasonable person would complain about, and it must put persons who share a protected characteristic at a particular disadvantage 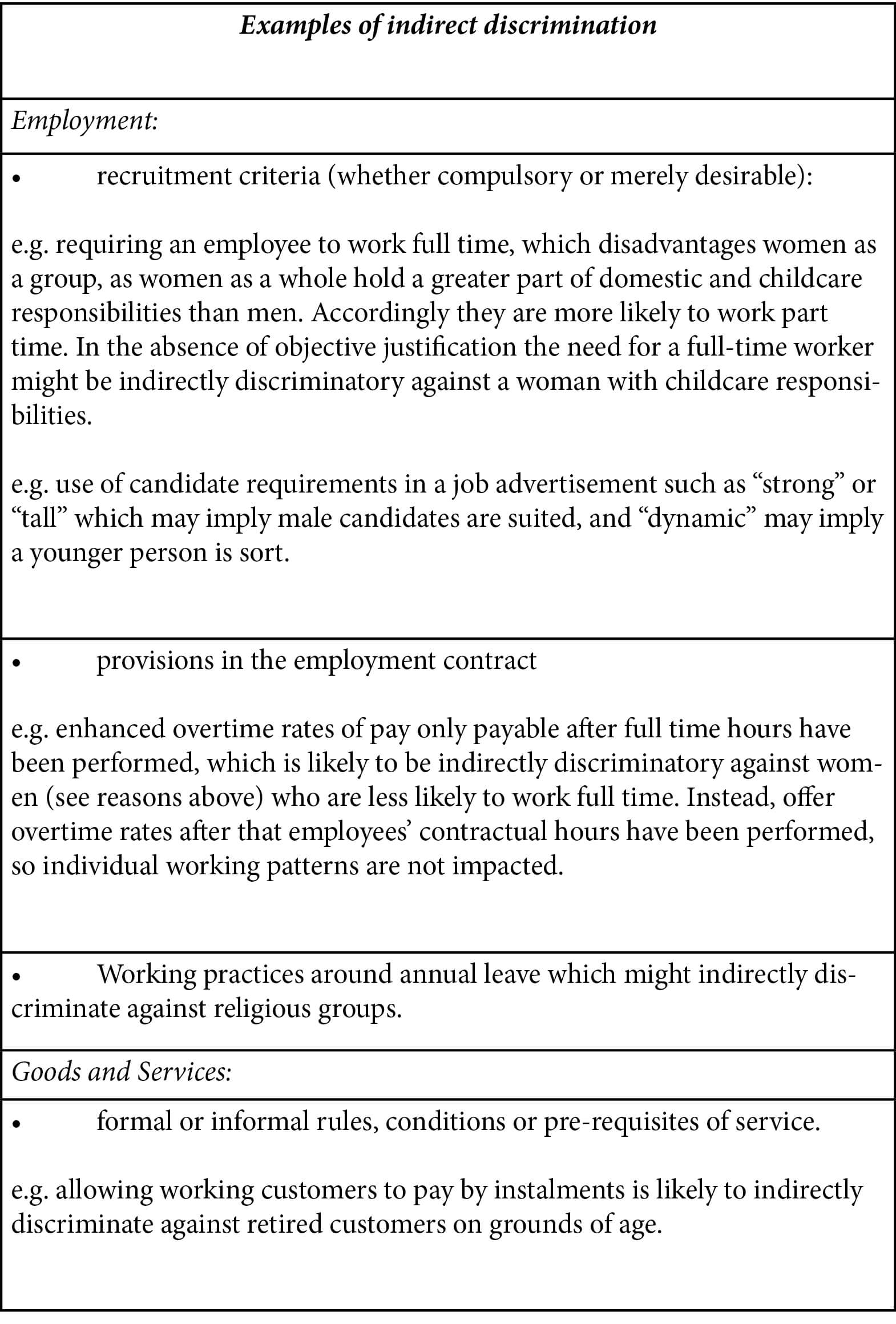 A person (A) harasses another (B) if A engages in unwanted conduct related to a relevant protected characteristic which has the purpose or effect of either:

To determine if the conduct shall be considered as having such an effect the following must be taken into account:

“Sexual harassment” occurs when A harasses B if A engages in unwanted conduct of a sexual nature, and the conduct has the purpose or effect referred to in the general definition.

It is not necessary to have been an ongoing course of unwanted conduct; a one-off incident can amount to harassment. Further, there is no obligation on the victim to have made the perpetrator aware that the conduct was unwanted.

Harassment claims do not need a comparator. The claimant does not have to show that they were, or would have been treated less favourably than another person.

A person (A) subjects another person (B) to a detriment because either:

The aim of the legislation is to protect claimants against being subjected to a detriment which is discriminatory who do (or might do) “protected acts”.

Victimisation is usually carried out by a practice that has been the subject of a discrimination complaint by a current or former employee or service user. For example, instigating “trumped up” disciplinary action against an employee who is supporting a colleague in their own grievance.

However, it can be carried out by an unrelated party, for example, a prospective new employer could refuse to employ a candidate has given evidence against a previous employer in a discrimination case. Or a prospective service provider could refuse to provide services to a potential customer who has given evidence or complained about other customers in a discrimination case. In both circumstances, the practice would be liable for victimisation.

In the second part of this article, Stephenie will discuss the legal requirements relating to accommodating disabled staff and clients.

If you would like further information about the HR and employment law issues surrounding discrimination, please contact Stephenie Malone (Associate Solicitor – Healthcare and Veterinary Specialist) at Harrison Clark Rickerbys solicitors.

(iii) In legal terms, the complainant is defined as “the claimant”.

(vii) Marriage and civil partnership, and pregnancy and maternity, are not relevant protected characteristics for harassment purposes. However, unwanted conduct related to these matters could amount to sex or sexual orientation harassment.