how we can help
Why join HCR? +
About Us Our Values Life outside the office Our Professional Networks
Early Careers +
Routes into a legal career Paralegals career Training Contracts Vacation Schemes
Our Current Vacancies
Around The World +
LEI Network China India Netherlands Nordics USA
Home > Blogs > Draining water from your land – what happens when there is a flood?

Draining water from your land – what happens when there is a flood? 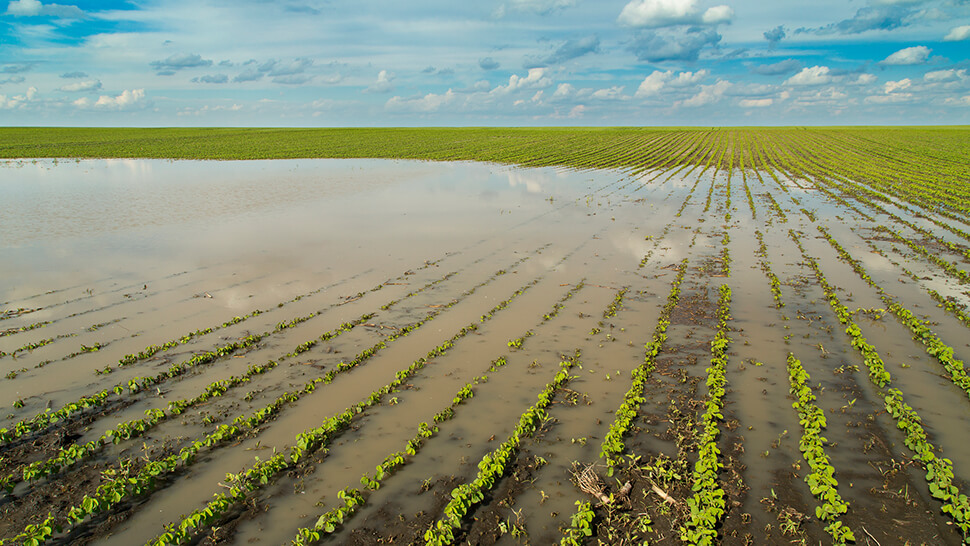 In the first post of this series, we set out the general legal principles that apply to water that comes onto, and drains away from, agricultural land.

We saw that the starting point is that water which is naturally present on land and which drains away naturally will not generally lead to any liability on the part of the landowner when it leaves their land. Following on from that, it stands to reason that a landowner will not usually be under an obligation to take action to prevent their neighbour from flooding.

There are, however, occasions on which liability can and will be established. Each case will need to be considered on its facts, but there are certain matters that will make it more likely that a landowner would be liable and certain things landowners should accordingly do to protect themselves from problems.

No article concerning water that collects would be complete without a mention of artificial structures such as reservoirs. Where water has been collected on land artificially, such as in a reservoir, special rules apply.

The Reservoirs Act 1975 as amended imposes particular duties on the landowner as to the construction and inspection of such features. Failure to comply with these can result in enforcement action by the Environment Agency and potential criminal liability.

That is not to say, however, that water collecting on your land would need to be classed as a reservoir in order for you to be under particular duties.

In civil law, there is a well-established (since at least 1868!) rule that a person who uses their land in a ‘non-natural’ way by virtue of something they keep on it will be liable if that thing escapes. The rule was established in the case of Rylands v Fletcher, which itself concerned a reservoir.

In that case, the reservoir had been built by the defendant on their land and water escaped from it. The defendant was found liable for the damage suffered by their neighbour. The rule imposes strict liability, provided the damage is foreseeable. In other words, if damage is of a kind that someone might reasonably be expected to suffer, liability does not require a finding of fault and so is much easier to establish.

We lawyers talk of Rylands v Fletcher as being a particular kind of liability for nuisance. What we mean is that it applies in particular cases where something unusual escapes. Anything that interferes with a neighbour’s enjoyment of their property, or which comes onto their land without permission can, however, amount to either a nuisance or a trespass, giving rise to a claim in damages. Water is no exception.

Turning to cases where water falls, flows or collects naturally, the law has historically imposed little in the way of restriction on landowners. Courts were generally reluctant to make landowners liable for water that left their land and expected those downstream to take steps to protect themselves. It left flooded parties generally without a remedy if they did not act.

By the 19th century, case law had established that a landowner was entitled to put up defences to protect their land against flooding, even if that meant that a neighbour’s position may be worsened. No single landowner could complain that they had the ‘right’ to be protected from flooding that occurred naturally . The position was different in the event that the flow of water was altered artificially. In that case it was more likely that liability for damage could be established.

The law has moved on considerably since then. This in part reflects the increasing pressure on available land, now used far more intensively and in competing ways for housing, transport, industry and agriculture. By the end of the 20th century, the law offered much more protection for those that were flooded, and expected more of those upstream. By this time, where a landowner knew – or ought to have known – of a hazard that may pose a risk to their neighbour, but did nothing, they could be held liable for resulting loss.

This is the state of the law today, in short: regardless of whether the hazard is artificial (such as a blocked drain) or natural (such as a channel of rainwater), a party is at risk of liability if their action or inaction on their land leads someone else to suffer loss.

It is important to note that the defendant may not be the landowner but someone who uses the land day to day. The question to be asked is who is in occupation of the land, in other words who exercises a degree of control over it. It is possible for there to be more than one defendant, for example a local authority as the owner of the land, together with the farmer who grazes cattle there.

The aptly-named case of Leakey

The leading case is that of Leakey & Ors v National Trust . Here, the general principle was established that where a natural hazard is present on land, and might threaten a neighbour’s land, an occupier is bound to act reasonably either to prevent or minimise any risk of foreseeable damage of which the occupier know or ought to know.

Reasonableness is key. It is assessed by taking into account all of the surrounding circumstances, including the defendant’s own resources. What it is reasonable to expect of a large landowner like the National Trust might not be viewed as reasonable for a tenant farmer making a modest living from a small farm.

A court will have to take a view as to what would be fair, in each case. It will take into account the extent of the risk, how likely it was that it would cause damage, the defendant’s knowledge of the hazard and how costly and practicable it would be to take steps to remove it.

The law today certainly makes it easier for someone who is flooded to mount a successful claim. No longer will a defendant be able to draw easy distinctions between natural and non-natural hazards or claim that everyone must simply look after themselves. Claims can be complex, however: it is easy to see how arguments can arise between multiple neighbouring landowners as to who ought to have done what, and when and how. Further, the test in Leakey can be difficult to apply: it is hard to predict quite what factors will ultimately tip the balance with a particular court.

We now know, of course, that amongst the ‘public goods’ that farmers and landowners will be expected to deliver under the Agriculture Bill is the taking of active steps in relation to flood water management. What might those schemes look like? How will they sit against the civil law in terms of potential liability? How might they be set up in practice?

Those are the questions we examine in the next and final article of the series.