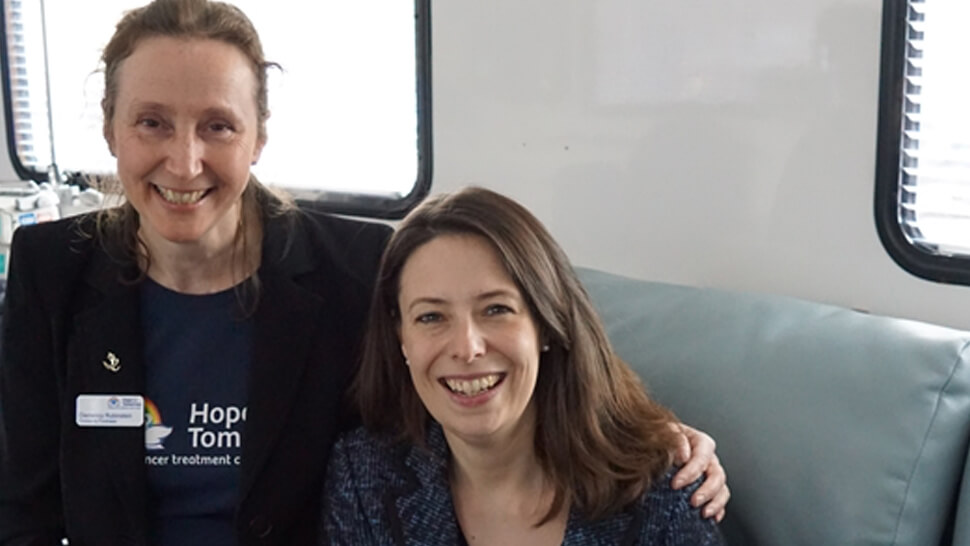 Celebrating nine years of the world’s first mobile chemotherapy unit, established by the charity Hope for Tomorrow in Gloucestershire, Harrison Clark Rickerbys staff were able to see their charitable donation to the unit in place, having been well-used by patients, at the unit’s open day in Cirencester last week.

The firm, whose charitable trust donates money to good causes across the Three Counties each year, bought the unit a special chemotherapy chair for £1,399 in 2014 – it features a dual control lift which helps both patients and staff during treatment.

The unit, known as “Helen”, was the world’s first such unit, bringing cancer treatment close to patients’ homes, cutting travelling and waiting times and reducing the stress of hospital treatments. Run jointly by the charity and the Gloucestershire Hospitals NHS Foundation Trust, it is based at Cheltenham Oncology Unit and travels to the Forest of Dean, Tewkesbury, Stroud and Cirencester each week.

Charlotte Thornton-Smith, head of Harrison Clark Rickerbys’ health and social care team, said: “I was delighted to see what good use our donation had been put to – the unit not only supports patients really effectively but also helps hospitals which are under such pressure at the moment. The fact that the charity is about to launch its tenth unit of this kind is testament to just how important the service is becoming.”

Hope for Tomorrow is already raising money for a replacement unit for Gloucestershire – they have collected £60,000 towards their £247,500 total, and would like to raise their total in time to launch it next year, 10 years on from Helen’s launch.

Charity Founder Christine Mills said: “All of us at Hope for Tomorrow are very happy and proud that Helen is helping to reduce stressful travel for Gloucestershire cancer patients for four days every week.  We’d like to thank all the funders, supporters and volunteers who have gone the extra mile for us to make it possible, and all those who support us to bring cancer treatment closer to home here and across the UK, now and in the future.”