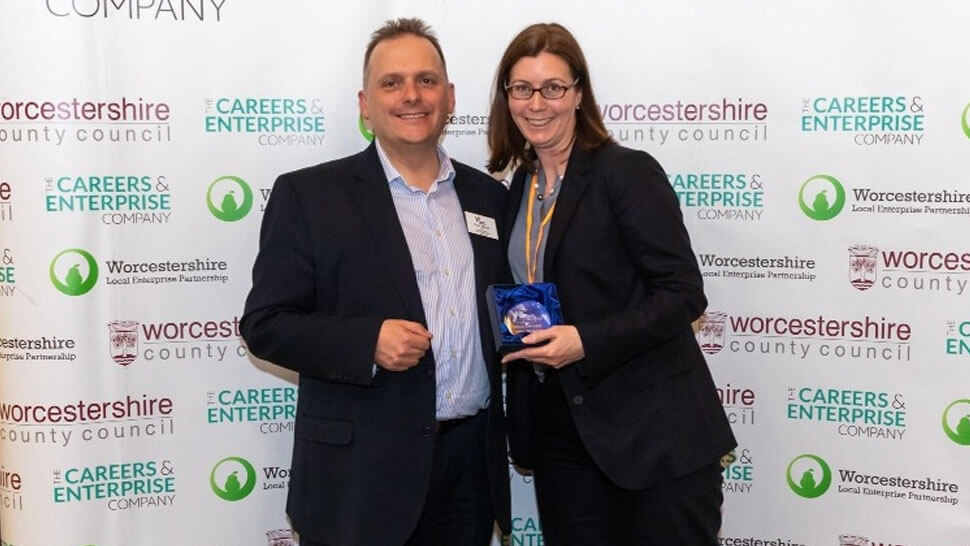 Commitment to supporting young entrepreneurs across the Three Counties was rewarded when lawyer Joanne Hodgetts from Harrison Clark Rickerbys received a gold award for outstanding services to Young Enterprise at the charity’s county finals.

Joanne, a dispute resolution lawyer, who is also chair of the Hereford and Worcester branch of the Institute of Directors, has supported the charity’s efforts to encourage enterprise and business skills among young people for several years, judging competition entries and supporting teams who take part.

Aimed at senior school pupils, Young Enterprise’s Company Programme supports them to set up and run their own company, from deciding on the name and product to creating a business plan, managing the company finances and selling to the public at trade fairs.

She is one of several staff at the firm who give their time to support teams from across the region who enter the annual competitions – each team has a mentor from the commercial world, and entries are judged by businesspeople. Alison Scott and Rupert Seldon mentored the team from the King’s School, Worcester, (The Bottom Line), while in Herefordshire former team mentor Ellis Walby was a judge.

Joanne said: “I am very honoured to have received the award – for me, the real success is to see so many young people venturing into business for the first time and learning from every step they take on their journey, whether they win awards or not.

“Our keynote speaker was Sam Smith of Waylands Yard, and his business journey was fascinating – his message to the teams was to learn from their experience and consider plenty of career possibilities, because your first choice is not necessarily the one for you.”

Paul Moult of Worcester Bosch, chair of Young Enterprise for Worcestershire, who presented Joanne with her award, said: “Jo is a person who only ever says yes and can only ever offer solutions. She has become a very important part of Young Enterprise and her commitment and passion for the charity is second to none.

“Her support is not confined to Herefordshire and Worcestershire, where she is a board member in both counties, but in the West Midlands and beyond. If she can help, she will; if she can’t, she will think of someone who can. It was my honour to present the award to such a deserving recipient.”