how we can help
Why join HCR? +
About Us Our Values Life outside the office Our Professional Networks
Early Careers +
Routes into a legal career Paralegals career Training Contracts Vacation Schemes
Our Current Vacancies
Around The World +
LEI Network China India Netherlands Nordics USA
Home > News > Business leaders’ Brexit predictions 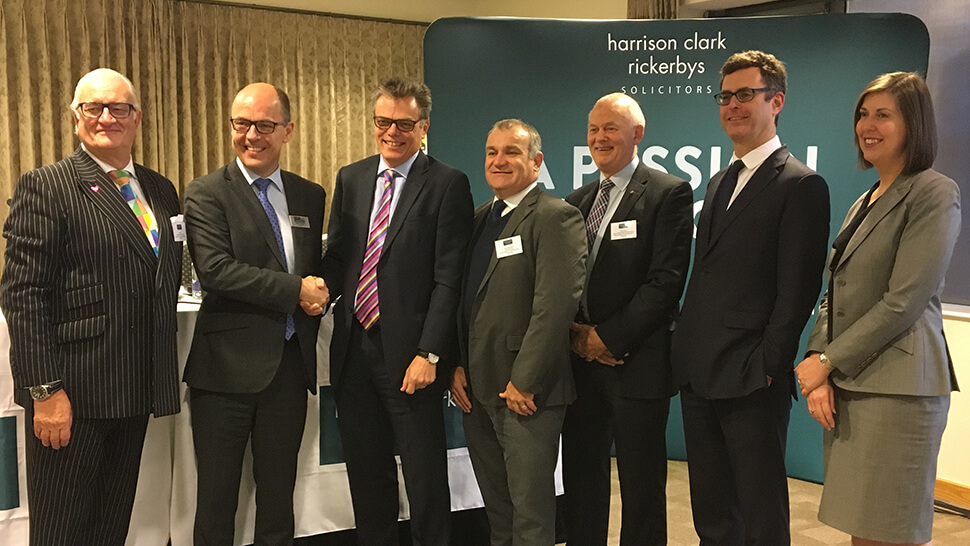 As Theresa May shuttles back and forth to Brussels, business people from across the region came together at Harrison Clark Rickerbys’ Brexit conference to discuss what the future holds, with speakers including Richard Butler, regional director of the CBI, giving their predictions for the outcome of the current Brexit deal.

Richard Butler, who heard both the Prime Minister and Jeremy Corbyn at the CBI conference on Monday, said: “No-one in the EU wants a no-deal Brexit – that is the least favoured option. We have some success in getting Government to take on board the business issues. They have acknowledged the need for frictionless trade, but we have not made as much progress as we would like on migration issues.

“We are cautiously optimistic that Theresa May will be able to get something through Parliament; they may not want what is on the table, but they want a ‘no deal’ even less.”

Businesses are making contingency plans – Mini will stop production for a month in April, bringing forward their summer shut-down, with concerns for many firms over supplies of components and materials. He said: “No company wants to be the one to stop Jaguar Land Rover’s production line – one major distribution company has even bought its own North Sea ferry so that it can continue to bring its lorries in and out of the UK from different ports.”

Practical advice for businesses came from Frank Myers, chair of Herefordshire’s Business Board, who spoke of his own experience as a successful exporter and business owner – he owns Myers Road Safety and MCP. “We need to redouble our exporting efforts,” he said, “especially if we can now sell anywhere.

“What concerns me is the paperwork and how that will increase – I sold £1,400 of goods to Switzerland which they certified as being of EU preferential origin. I then had someone from HMRC come to my office for four hours to check that that was correct; I am concerned about whether that kind of bureaucracy will get worse.

“I don’t believe that a second referendum is a good idea – I think the deal will get through to the voting stage and then the question will be asked whether we want to choose that deal on offer or not leave at all.”

Robert Capper, Head of Sectors for HCR, said: “Brexit is above all about people and the quality of the discussion we have had here today reflects the focus of the region’s business leaders on what is best for their people and for the economy.”

Ian Mean, board member for GFirst LEP, reminded the conference, which drew together businesses from advanced manufacturing, health and social care, education, agriculture, professional services, finance and construction and engineering, that the existing deal was just the beginning.

He said: “It is important, whatever our future relationship with Europe, that business does not have lots of extra paperwork and bureaucracy. I think it will be at least another year of negotiations on the real nitty-gritty of the deal before we can see our position clearly.”

Gary Woodman for Worcestershire LEP outlined the infrastructure developments the LEP is supporting across the county, providing a sound basis for connectivity and access of all kinds. He also stressed the support the LEP gives to a broad range of educational initiatives, so that young people have access to the vocational and professional education they need to start and continue their careers.

Delegates had the chance to vote live throughout the conference – 82% said they would vote the same way now as they did in the referendum, with 46% now less confident of their business success post-Brexit than they had been a year before.

While 32% have explored markets outside the EU since the referendum, 43% still believe that EU membership in some form is the best option for the UK economy. Of those looking overseas, the US is the most popular market (43%) with China and India at 24.3%. They also have the chance to vote as the situation develops – Harrison Clark Rickerbys has an online Brexit survey for businesses across the region which will be open until March at www.hcrlaw.com/brexit-survey.