how we can help
Why join HCR? +
About Us Our Values Life outside the office Our Professional Networks
Paralegals and Trainees +
Routes into a legal career Career Paralegals Training Contracts Vacation Schemes
Our Current Vacancies
Around The World +
China India Netherlands Nordics USA Elsewhere
Home > Blogs > The Job Support Scheme and schools

The Job Support Scheme and schools 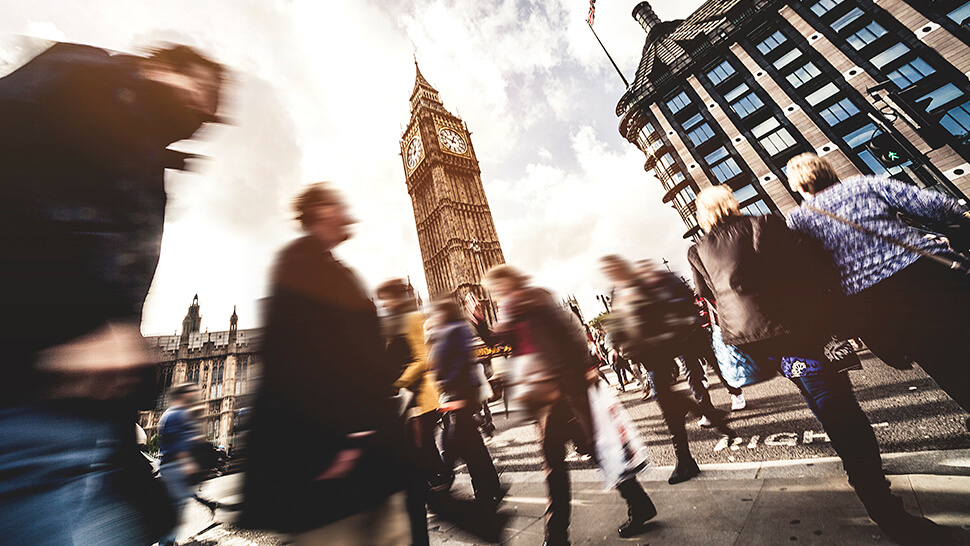 This note answers some of the questions that schools are likely to have about the new government Job Support Scheme (the “Scheme”) announced by the Chancellor on 24 September 2020 in an attempt to try to avoid a wave of redundancies and job losses when the Coronavirus Job Retention Scheme (the “CJRS”) ends on 31 October 2020.

The government has published a Winter Economy Plan and a factsheet setting out the headline points, with further guidance promised shortly.

This note is correct at the time of writing on 30 September 2020.

Details of the Scheme

In summary, for those employers participating in the Scheme, the government will refund part of the wage cost of employees on short-time working arrangements.

The Scheme is “designed to protect viable jobs in businesses that are facing lower demand over the winter months due to Covid-19, to help keep their employees attached to the workforce”.

In making this statement, the Government has acknowledged that the Scheme is unlikely to be of benefit to all employees whose work has been affected by the pandemic; it will only be of benefit where a job remains viable on short-time hours.

Examples in a school setting may include:

The Scheme will be introduced from 1 November 2020 and will continue for six months until 30 April 2021.

All small and medium enterprises (“SMEs”) will automatically be eligible to participate in the Scheme. To date, the Government has not defined an SME for the purpose of the Scheme.

Large businesses will have to meet a financial assessment test in order to demonstrate that their turnover is lower now than it was before the Covid-19 pandemic. Further details are awaited in respect of what the financial assessment test will cover and the time period to be taken into account. However, the government has made it clear that large employers using the Scheme will not be permitted to make capital distributions (such as dividend payments) whilst accessing the grant.

For an employee to qualify, for the first 3 months of the Scheme, they must be working at least 33% of their normal hours. After 3 months, the Government will consider whether to increase the minimum hours threshold.

The employee does not have to have previously been furloughed under the CJRS to be eligible under the Scheme.

Employees can be moved on and off the Scheme and their working hours may be varied, but each short-time working arrangement must cover a period of at least 7 days.

The employer pays for the hours the employee has worked, as normal. The part of the employee’s normal working week that is not worked is split as follows:

The grant does not cover Class 1 National Insurance Contributions or employer pension contributions, although these will remain payable by the employer.

Importantly, for those employees who have previously been furloughed, an employer will use the employee’s “usual” pay and/or hours to calculate their wages, not the amount they were paid whilst on furlough.

An employee works the minimum of one third (33%) of their usual hours. Of the remaining 66% not worked (save for some rounding):

So an employee working 33% of their hours will receive at least 77% of their pay as shown below: 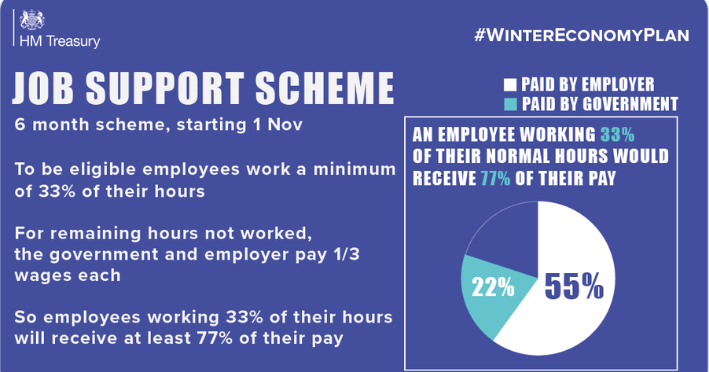 The government’s contribution will be capped at £697.92 per month.

Under the CJRS, for employees who do not have fixed salary or hours of work, their “usual” hours or pay are broadly based on the higher of an average of last year’s wages or last year’s hours, against wages or hours in the equivalent pay period of the previous year.

The government is yet to provide guidance on how this will work under the Scheme, but they have indicated that the calculations are likely to be very similar.

We expect the claims process to be very similar to that under the CJRS (i.e. through an on-line Gov.uk  portal). Employers will be reimbursed in arrears. The first claims can be made from December 2020.

An important point for employers to note is that, unlike the CJRS, employees in relation to whom the employer is accessing the Scheme, cannot be made redundant or put on notice of redundancy. Likewise, an employer cannot claim the grant under the Scheme for an employee serving notice when their employment has been brought to an end on grounds of redundancy.

Employees can be brought off the Scheme and subsequently made redundant should it no longer be economically viable to retain them.

As with the CJRS, HMRC will check claims submitted by employers under the Scheme. Payments may be withheld or need to be paid back if a claim is subsequently found to be fraudulent or based on incorrect information. Grants can only be used to reimburse wage costs actually incurred.

Employers who use the Scheme will also be able to claim the Job Retention Bonus of £1,000 for each furloughed employee that is still employed on 31 January 2020, if they meet the applicable eligibility criteria.

Crucially, short-time working under the new Scheme, just as with the CJRS, will require the written agreement of each employee to the proposed change in their contractual terms. Without obtaining the agreement of staff, schools may be at risk of claims of breach of contract, unlawful deductions from wages and/or constructive dismissal as they will be failing to pay their employees in line with their contract of employment.

Written notification of the arrangements must also be made available to HMRC on request.

Whilst schools will indeed have to pay an employee for a certain percentage of hours that are not worked, the Scheme will allow schools to retain their skilled and trained workforce.

Considerations will need to be made about the consequence of such employees leaving, both in terms of the short term business effect, but also the medium term cost of recruiting and training new employees in the future.

In terms of the bigger picture, the Scheme will also, of course, protect the employment and income of many workers who would otherwise have been at risk of redundancy.

That said, the Scheme is only likely to be suitable where schools are confident that once normal working practices resume, they will need their currently affected staff to return to work at full capacity. The Scheme is also only of benefit where there is at least some work currently available.

As a result of the current Government guidance and/or social distancing measures, some schools have no work at all for employees in certain roles (for example, school bus drivers where the bus service is currently suspended and lunch time supervisors as a result of pupils eating their lunch in classrooms supervised by a teacher). These roles may well be viable in the long term when the restrictions change or are lifted but there is no work available currently. What do schools do in this situation?

The Scheme appears to be focussed on jobs which are currently viable and where there is at least some work available (i.e. a minimum of 33%). In a situation where there is no work currently available, even if the roles impacted are likely to be viable in the longer-term, schools may still need to consider possible redundancies, as the new Scheme will not assist.

In theory, schools could give employees the choice of the short-term working arrangements under the Scheme or leaving the school’s employment on grounds of redundancy.

Schools would first need to consider the cost implications associated with each option. If the redundancy costs are similar to or would outweigh the cost to the school of using the Scheme, this may well be an incentive to seek the employee’s agreement to them being placed in the Scheme, instead of making them redundant. If the employee was also furloughed, schools will have the additional incentive of the job retention bonus.

Schools should consider whether they have any other options available to them, aside from accessing the grant under the Scheme or commencing redundancy consultation processes. For example, some schools may be able to operate short-time working where there is no requirement to give additional financial support over and above the hours worked by the employee. However, the contractual ability for a school to implement short-time working measures is very uncommon in the education sector and would most likely need to be agreed with employees.

We recommend that schools familiarise themselves with the Scheme and, if possible, determine whether they are likely to be eligible to participate, based on the detail currently available. If so, schools should consider which employees may be able to benefit from the Scheme and the potential cost implications.

Further guidance is expected imminently and we will update schools once it has been issued. For specific queries in the meantime, please get in touch.

Hannah Wilding is a Cheltenham solicitor, specialising in employment and immigration.

What should schools do if staff refuse to test? 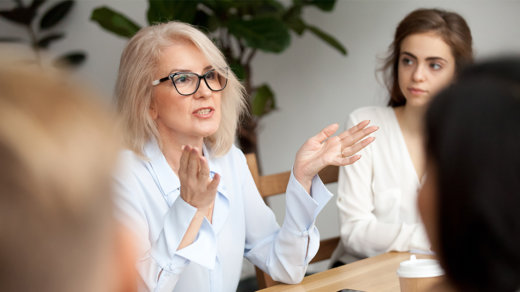 The care sector and the Supreme Court sleep-in pay decision